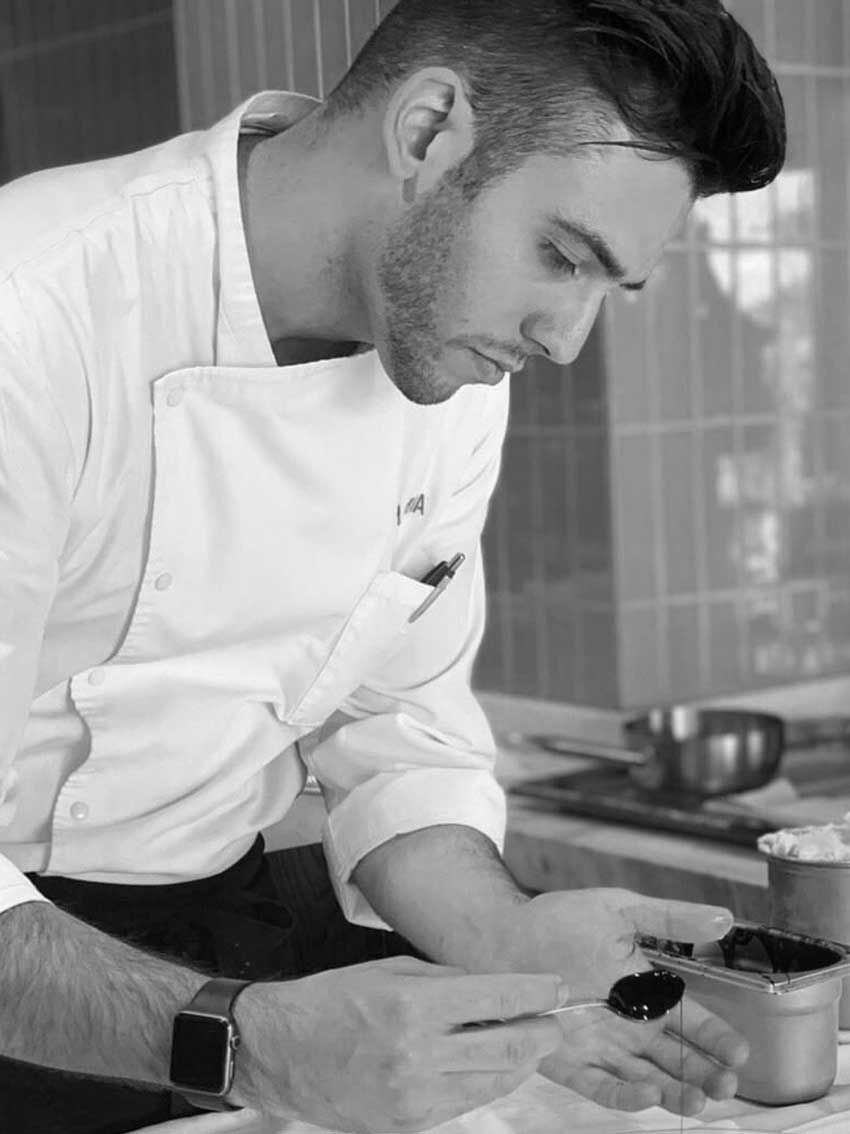 Michele Fanucchi was born in Lucca, and, as early as the age of 8, he began to put his hands in the dough without ever considering patisserie to be his life's work.

It was a three-month cultural experience in America that changed his outlook, turning a simple passion for cakes and sweets into something far more serious. After a brief period in two gourmet restaurants in the province of Lucca to test his interest in savoury food, Michele Fanucchi realised that he was too tied to pastry and found an important opportunity at 'Arnolfo', a Michelin 2-starred Tuscan restaurant.

The teachings of Ettore Beligni, the restaurant's Pastry Chef at the time, were fundamental, and after six months, he asked him to take his place. So, thanks to the support of Chef Trovato and the encouragement of his colleagues, today, Michele Fanucchi celebrates four years since his arrival in Colle Val d'Elsa.

The Dessert with Creamy dark chocolate and Val di Chiana plums was born from the desire to create a completely gluten-free dish, allowing everyone to enjoy a moment of fine patisserie.

In addition, I wanted to give prominence to an important summer fruit of our territory, the plum, by treating it differently, giving it an intensity of flavour and colour.

For this reason, I borrowed oil from the kitchen, which combines perfectly with the sweetness and acidity of the plum, to put the fresh fruit in the dish using an alternative cooking method.

Then there are the sauce and the sorbet processes that allow you to appreciate the plum in all its natural flavour and in two different consistencies.

Finally, as a surprise inside, there is Moelleux combined with the aromatic bitterness of the dark chocolate extra Amedei Toscano Black 70.

First, prepare the ganache by melting the chocolate and adding the boiling milk in three stages, blending everything with an immersion blender, adding the hot, neutral icing, and continuing to emulsify. Next, pour the mixture into the desired mould, inserting the fresh plum cube to thoroughly incorporate it into the ganache. Then freeze the mixture.

Proceed with the preparation of the mixture in the meantime.

Melt the chocolate in the microwave at about 40° C.

In the meantime, soften the butter to a cream and add the sugar. Next, add the chocolate to the butter mixture, taking care not to melt it with the heat of the melted chocolate. Next, add a pinch of salt, the whole eggs and finally, the sieved powders. Store in a piping bag.

To bake, fill the desired mould halfway and put the knocked-down ganache in the centre, cover with more mixture and bake at 175° C for about 10/15 minutes (the baking time depends on the shape and size of the chosen mould).

Bring the milk to a boil, add and melt first the glucose and then the softened gelatine. Pour the liquid a little at a time over the semi-dissolved chocolate and emulsify with a hand blender. Check that the temperature is around 40° C and add the fresh cream while continuing to emulsify. Leave to rest for at least 12 hours with plastic film. Then work with a spatula until smooth and store in a piping bag with a smooth 0.6 cm nozzle.

First, prepare the plum puree to concentrate the flavour and retain the colour. Then, soak the plums with 10% of their weight in sugar for about an hour.

Now weigh all the powders together. Heat the water and glucose to 85 °C and add the powders, whisking to avoid lumps. Let the mixture rest until it is lukewarm. Add the syrup to the plum puree, add the lemon juice and blend with an immersion blender to emulsify the mixture. Place in a Pacojet glass and blast chill. Blend if necessary.

Work the butter with the icing sugar, add the egg yolks and finally the sieved flours, working until completely absorbed. Finally, add the salt at the end. Leave to rest in the fridge for 12 hours before using. 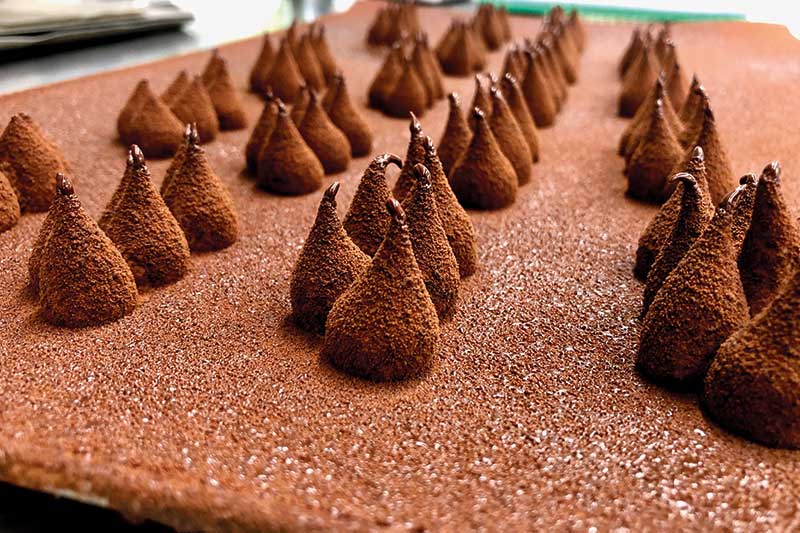 Wash the plums and remove the stones so that they can be cut into coarse pieces. Mix the chopped plums with sugar, citric acid and fresh thyme. Let them macerate for half an hour and then cook them with the same technique used for the sorbet puree, only taking care to keep the cooking time longer, to obtain a sauce suitable to be spread on the plate without being too watery or liquid. Take care to remove all the thyme before blending, sieving the mixture with a very fine mesh.

Combine all the ingredients and blend with a blender. Spread finely on Silpat and bake at 180° C for about 6/7 minutes. As soon as it comes out of the oven, cut the dough into the desired shape before it hardens.

Stone the plums, simply cut them in half, place them in vacuum-packed bags with a sprig of thyme and put delicate quality olive oil in the bag. Next, steam the plums in the oven at 80° C until they are slightly soft, about 7 to 8 minutes. (the time depends on the size and ripeness of the plum). Once removed from the oven, place them immediately in an ice bath for a few minutes. Then store the fruit in the fridge to allow the oil to penetrate completely.

First of all, with the help of a Silpat, it will be necessary to dress the melting Namelaka by forming an ingot composed of 5 wedges that touch each other so that once knocked down, they remain attached in a single block.

Glaze these knocked-down ingots with a spray gun loaded with a glaze of half dark chocolate and half cocoa butter until they are completely covered. Place each frosted ingot on a rectangle of the same size, made with the gluten-free shortcrust pastry previously rolled out, cut to the desired size and baked.

Now it's time to serve. Using an elbow spatula, make a comma on the surface of the plate with the plum and thyme sauce. Place the ingot with its pastry slightly astride the comma.

On the right, place a half teaspoon of crumble on which a plum sorbet quenelle can be placed. On the right again, put the Moelleux.

Finish the dish by cutting plum slices in cooking oil and setting them alternately on the dessert, sprigs of fresh thyme and two cocoa tulle wafers to give extra height to the dessert.

Products from this article:

What is the philosophy and secrets of the Gelato Maker who won the Gambero Rosso Best Chocolate Gelato award? 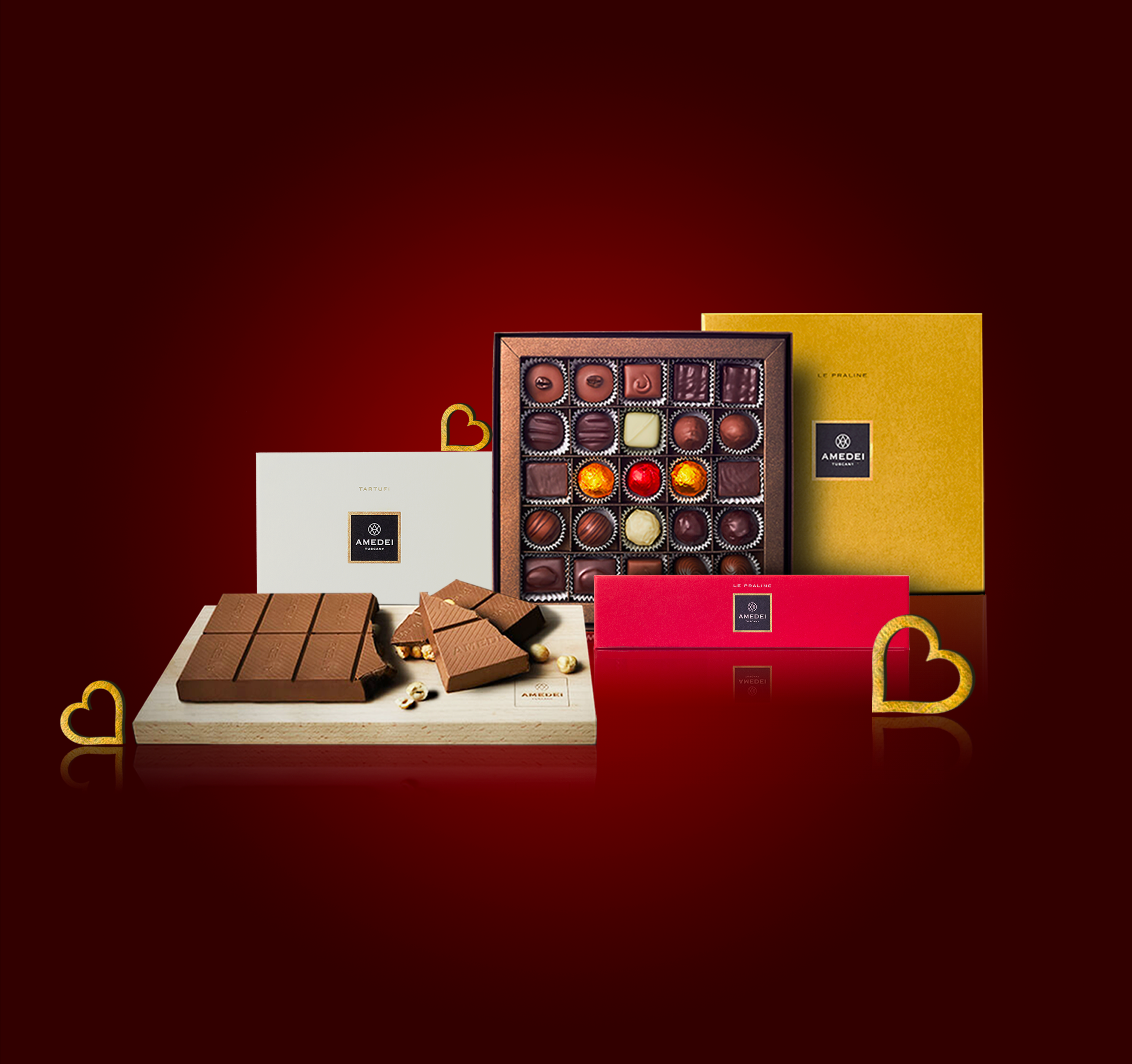 THE ITALIAN BEAN TO BAR FINE CHOCOLATE FOR SAINT VALENTINE 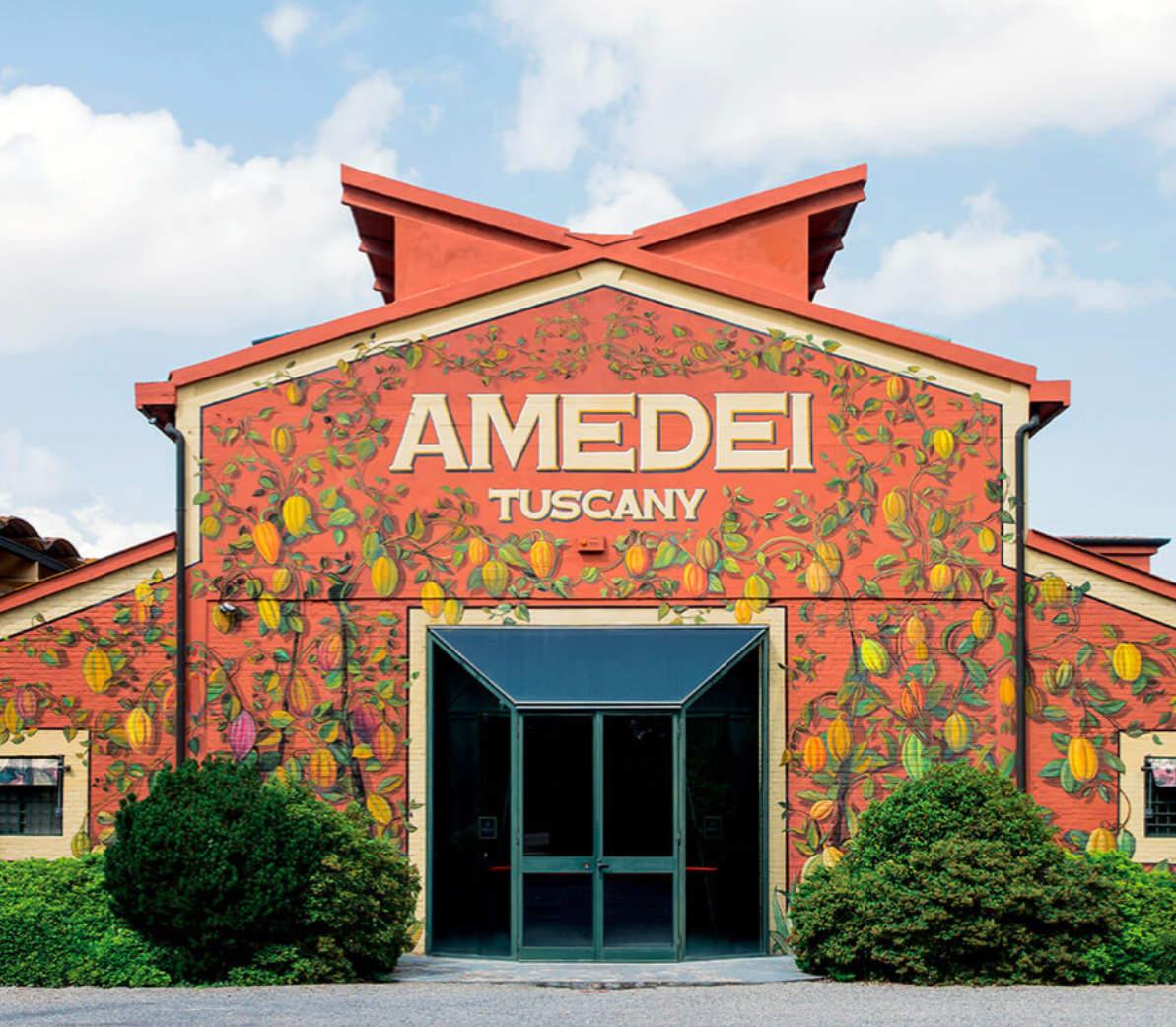 OUR BEAN TO BAR PHILOSOPHY